Life is too short to not seek to love, worship and respond to God in all life situations.  Don’t confine your worship of “enjoying God” to services or rituals … worship God anywhere.

Today’s the first of January 2020 . . .
The other day, (aka - last year), I read and ruminated on a  short-chapter entitled “Of Putting Up with Others Faults” in Thomas A’Kempis’ “Imitation of Christ”....
Passing on my rumination . . .
I have the capacity to prosecute in others what I cannot overcome in myself.

As fallen humans, within ourselves we neglect strengths and defend our self-unchallenged weaknesses

I hear A’Kempis speaking to me of patience as an alternative to intolerant negligence.  A patience that allows God’s processes, within others and me to, “have its perfect work”.

Through patience I give others freedom to live, and myself – freedom to change; or at best endure! – JD

*Thomas À Kempis, 1373-1471 a Christian theologian, probable author of Imitatio Christi (Imitation of Christ); a devotional book that, with the exception of the Bible, has been considered the most influential work in Christian literature . . .
Posted by Johnny Cee Dee at 3:24 PM No comments: 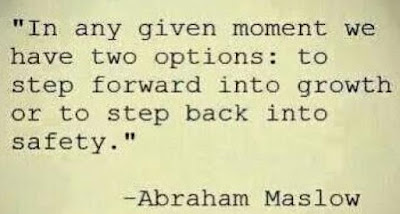 Posted by Johnny Cee Dee at 1:20 PM No comments:

In my “growing up world” adults would often say to me; “Johnny, think before you act.”

Now in my aging adult mind I reply to them; “I’m thinking, I’m thinking.”

You and I; or simply we, live a peopled world. People thinking, acting and reacting; people speaking, quoting others, gossiping, judging; people telling truths, or on occasions lying to and about others.
How come?

As fallen-humans we have a propensity to act and speak before we’ve thought through matters.  Unfortunately this is especially so when hearing bad things about other persons – persons we think we know, but don’t … otherwise we would be slow to listen and even slower to speak.  As if quick speech was even a necessity.    Why chose to hear and see bad … one could equally choose to see and hear the good.  One-sided thinking can lead us to deficient action . . .

The deficiency-issue is not merely hearing and controlling speech; though that is important … it’s engagement with wisdom . . .  wisdom as in becoming wise.

If we want to adequately hear the “intercourse of life”, ensure you do it in concert with the wise.   Be conscientious, be guided by someone wiser than yourself … God should be the closest “wise someone” to you.   After all, we live in His world.


*A rumination after reading chapter four in Thomas A’Kempis’ “Imitation of Christ” (1441)
Posted by Johnny Cee Dee at 11:46 PM 1 comment:

Those two journey-legs were separated by thirty-three years of living and serving within a Pentecostal faith community; I “came home” in 1997 . . .

Prepare to think with me

One day, seeming out-of-the-blue one of my seminary Profs stated; “Baptists ruminate . . . ”

Thinking his statement over, chewing reflectively, crystallising the impact of his words, and summarising their focused implications, I mumbled to myself; “shock, horror I’m still a Baptist inside, the default-behaviour is still inside me! I’m not an allegedly intelligent Pentecostal, I’m still a Baptist" . . .

We read, listen, think, summarise, interact, and respond to ideas, perspectives, and communication from Biblical sources (aka preaching). Local and broader church forums are often characterised by debate or its 21st century equivalent, reflection. We Baptists are a community of believers who don’t quickly embrace or subscribe to belief(s) without process. Our default-process is rumination.  The practice of turning a matter over and over in the mind, chewing the “cognitive-cud” by reflecting mulling over and over again; we don’t merely think, we think about our thinking. Rumination is a “vital-as” personal and communal custom in mission-centred Baptistic life; it is the fuel-source for the practices of debate and reflection. We’re a people of Scripture and Spirit. Through rumination, debate and reflection we can relationally-process Word and Spirit into missional action and lifelong discipleship.

If you are thinking, yes but how; keep reading and ruminate with me . .

“Take a good look, friends, at who you were when you got called into this life. I don’t see many of “the brightest and the best” among you, not many influential, not many from high-society families. Isn’t it obvious that God deliberately chose men and women that the culture overlooks and exploits and abuses, chose these “nobodies” to expose the hollow pretensions of the “somebodies”? That makes it quite clear that none of you can get by with blowing your own horn before God. Everything that we have—right thinking and right living, a clean slate and a fresh start—comes from God by way of Jesus Christ. That’s why we have the saying, “If you’re going to blow a horn, blow a trumpet for God.”

Chewing with Qoheleth and the Caterpillar

Lately I've been watching the progress of this year's crop of "our swan plant's temporary residents" -- so snapped them this morning . . .

they are living, and continuously eating while in a trans-formative journey . . .

just like us humans, who according to Qoheleth* in his wisdom-observations defines that eating, drinking and getting on with living is good within the trans-formative struggle called "life" . . .

As I "chew-my-way-through life" do I live-life as intuitive, instinctive, or instructive . . . OR???? 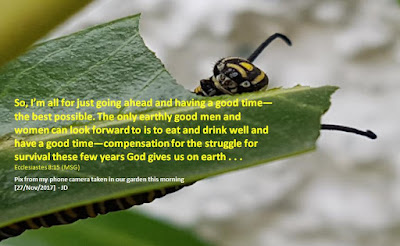 Posted by Johnny Cee Dee at 2:16 PM No comments:

Fear of the Lord—Positive yet serious

Recently I read and reflected on the chapter entitled “Of Heartful Remorse” in Thomas A’Kempis’ “Imitation of Christ” – passing on my reflection . . .
The phrase “fear of the Lord” is positive language, positive through serious.
When I consider the phrase through the term “holy awe”, its meaning becomes even more clearly focused.
The question of positive response to the Lord by holding Him in holy awe is best understood “the Awesome of the heavens above is still awesome when He is within my life and experience”.
In this inner-knowledge my repentances, cryings and commitments to change, flow as “heartfelt remorse without regret, for they are grace from the awesome God – my Lord”.


As I re-read the above, I’m moving from reflecting to rumination – JD J
Posted by Johnny Cee Dee at 1:57 PM No comments:

Johnny Cee Dee
I was born before WWII finished, about half-way through. Have enjoyed living, learning, leisure and working in my homeland and a few other countries in life so far. My spouse and I have a grown family + mokupunas who live around the world ... only one on the island these days ... my hair is still "somewhat black" at the moment ... reading, time with people, learning and empowering others in "learning-to-learn" and growing in their Christian spirituality are my main passions.